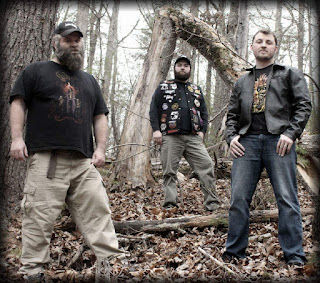 1.Can you give us an update on what has been going on with the band since the recording of the new album? For the past few months we've been gearing up to play Skulthor live. Getting our CDs printed, getting banners printed for the new artwork, a new t-shirt design, practicing our sets for the next few live shows, and even writing a few new riffs for the future.

2.You have a new album coming out in March, how would you describe the musical sound that is presented on the recording and also how does it differ from the stuff you have released in the past? The best way to put it is that it's more fully realized than our previous works. Stylistically, it's pretty similar to our earlier stuff, we've always blended a lot of influences, but our songwriting has matured.  We're always striving to keep improving on our playing and songwriting, and we think Skulthor represents the very best of our abilities at this point in time. We have relentlessly obsessed over this album and the story for over a year now, and we feel like the hard work really shines through.

3.This is your first album in 4 years, can you tell us a little bit more about what has been going on during that time frame? Since Legends of the Tusk a lot has happened musically, and in life for us. We wrote a bunch of songs in that span, some that made it onto Skulthor, and some that weren't up to the bar we've set for ourselves. Our long-time bass player Willie retired from the band to focus on family and building a house. We knew we wanted to keep going as a band, but I think both of us might've had our doubts that we would be able to find the right person. In the interim, we landed a couple good opening spots, one for Black Tusk, and one for Night Demon, for which Willie was glad to pick up the bass and take the stage a couple more times. Enter Chad Barnwell. We knew Chad from playing lots of shows with his band, Through the Fallen. We had become good friends with those guys and were pretty surprised when Chad, a lead guitar player, wanted to play some bass with us. Long story short, Chad has been the perfect fit, and we've picked back up with a renewed drive and energy.

4.The lyrics on the new recording are a concept album, can you tell us a little bit more about the songwriting? Out of the new songs we were writing, we started noticing a common theme. We felt like we could connect the songs into a grand tale of a warrior's journey. We had the core of the album, but we needed a beginning, one for the middle, and then an end. I Destroyer, Treachery of the Blind Raven, and My Name was Skulthor came about very quickly to fill in our missing pieces. The lyrics were written, re-written, and re-written again to make the story as coherent and flowing as possible. We also have most of a short story written, which we will be releasing in the future.

5.Also in the songwriting I can also see the mythological influences, can you tell us a little bit more about your interest in mythology? I (Micah) took an interest in Greek and Roman mythology at an early age. The first Clash of the Titans movie was on TV a lot when I was a kid, and I always loved to watch it. Same with Conan the Barbarian and Destroyer. Someone eventually bought me a book on mythology not long after, and I remember reading Beowulf and Icarus and Daedelus, among others. Later on, I discovered Norse mythology and was captivated again. Skulthor combines elements of Greek, Roman, Norse, and Conan, as well as our own mythology we began creating with our Warmallet EP.

6.What is the meaning and inspiration behind the name 'Temptation's Wings'? When the band was first starting to come into realization, I was trying to turn a corner in my life, and get it together. I was listening to the first Down album religiously back then, and the song Temptation's Wings really resonated with me. It's still one of my favorite albums to this day.

7.What are some of the best shows that the band has played over the years and also how would you describe your stage performance?
We've had the opportunity to play with and open up for some great bands including Night Demon, Visigoth, Black Tusk, as well as the mighty Iced Earth. We also landed an opening slot on Y&T's upcoming show in our hometown, Asheville, NC. In the past we always went for the no frills approach, just us and our instruments on stage. With this album we're going for a little more in the visual aspect, with our life sized album art, by David Paul Seymour, and some home made lights.

8.Do you have any touring or show plans once the new album is released?
We plan on playing as many shows in our region as we possibly can, and hopefully landing a spot on a festival or two. In the fall we'll be hosting our Stone and Steel Festival in our hometown, Asheville. It'll include some of our favorite bands from close by, and we'll hopefully landing a national headliner. Last year Cloak headlined. They recently signed a deal with Sea on of Mist, and we'd definitely recommend checking them out!

9.Currently you are unsigned, are you looking for a label or have received any interest? We're currently unsigned and manage ourselves. Our drummer Jason does the vast majority of our booking. Realistically we can't do much lengthy touring, as we all have full time jobs and families, but if the right deal came along, I think we'd all like to make a career out of our music.

10.on a worldwide level how has the feedback been to your music by fans of stoner and doom metal? We've been blown away and excited by the amount of feedback we've had so far. We've all been playing music for quite some time, and to have our music played around the globe is a great feeling. The UK has been really kind to us, in particular, and we've received some kind reviews from France and Spain too. There have been a couple people who weren't too thrilled with the album, but that's okay, we realize not everyone will like it, and the majority of the responses have been great so far.

11.Where do you see the band heading into musically during the future? We're going to keep striving to improve our skills on our instruments and as songwriters. Our vision is to keep making music that blends our favorite parts of all our favorite styles of metal. We've already been discussing what kind of story we might want to work on for the next album. Making a concept album was a lot of fun, and one hell of a good challenge. It's very possible we might go that direction again.

13.What are some of your non musical interests? We all like to play some video games when we can. We like to watch NFL football, and Chad and I like baseball. We're all pretty good cooks too. We try to get together with our families and friends, smoke some Boston Butts, and have a big feast when we can.

14.Before we wrap up this interview, do you have any final words or thoughts? We appreciate the great questions and the chance to talk about our music! Skulthor Ebonblade comes out on March 10th, and we hope everyone enjoys his tale as much as we do. Bring the metal!
https://temptationswings.bandcamp.com/album/skulthor-ebonblade

Posted by OccultBlackMetal at 8:20 AM