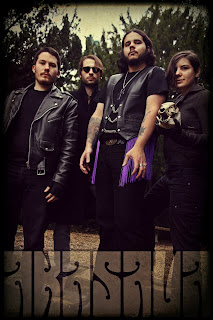 1.Can you give us an update on what has been going on with the band since the recording of the new ep?

First, thanks a lot for this interview! We are all doing good, we've been pretty busy rehearsing and working hard on new songs!

2.You have a new ep coming out in June, how would you describe the musical sound that is presented on the recording and also how does it differ from the stuff you have released in the past?

This is actually our debut release, we are a rather young band formed back in July 2014. We are presenting what we've been working on for the past few months. The EP was recorded live and it was important for us to capture that raw energy we have on stage. It's rather possessed, wicked, has its doomy ways, fuzzy moments and a certain kind of madness.

Lyrics are often influenced by those old movies I'm very fond of. It can be dreamy too, like weird visions of the moment that I need to put on paper. Sometimes I want to sing about long black haired vampires/witches, lovecraftian subjects and sometimes I'd rather sing about my feelings which results in some more or less chaotic sentences. I'm really into movies and books so I'm not afraid to say that I can be heavily influenced by the stuff I own. And it also comes to the way I dress, which is important to me once I'm on stage and outside as well. But globally speaking, the topics are always revolving around the unusual, the odd, the ancient arts, creatures & babes from the 60's/70's era, including the Hammer, Jean Rollin and Jess Franco movies. I also go for Argento and Italian Gialli movies, often accompanied by a delightful soundtrack...
"Sons Of Bastet", for example, is rather chaotic lyrically speaking as it brings up my passion for Egypt and also some kind of apocalyptic vision brought by those sons of Bastet, rising up to restore a certain order among the living and the dead - something like this.

4.What is the meaning and inspiration behind the name 'Akasava'?

It comes from Jess Franco's 'The Devil Came From Akasava' with Soledad Miranda who was a really fascinating actress. It came all very naturally though it's not my favourite Franco movie, the name got stuck in my head. I think it's pretty effective too. And also the movie has a killer score by Manfred Hübler & Siegfried Schwab!

We haven't played so many shows so far but the highlights were definitely playing with some great bands like Goatess, Barabbas and Witchthroat Serpent!
The stage performance is wild, raw energy, sweating like hell, open-heart surgery, all wrapped up with a ritualistic, theatrical approach.

We have two gigs next month, on the 21st and 27th in our hometown. It's been a while since our last performance so we can't wait to be back on stage!
We'll be playing with Bathsheba for an unforgettable occult doom night later this year, in October!
We are hoping to play more shows of course... we'll see what future brings!

Yes, it's all DIY so far, the EP is digitally released on Bandcamp and then, there will be a small run of CDs, available on Bandcamp as well.
As a record collector, I'd really love to have our EP straight out on vinyl format and so it does justice to Karmazid's amazing artwork that he did for us... Well, of course it would be amazing to know that a label is interested in releasing our music but in the meantime, we know where we are coming from so like I said before, we'll see what future brings! I also believe that hard work always pays off... Wait & see!

8.On a worldwide level how has the feedback been to your music by fans of occult rock and doom metal?

Pretty good actually so it's very encouraging and motivating! We are very pleased by the kind words and support we've received on the social networks!

I think the next step will be to release a full-length LP, we are already working on new numbers, we will play some of them during our upcoming shows!

My record collection which is made of 60's/70's psych/prog/heavyrock/folk albums is where I have all of my influences. I'm into record collecting for ten years now, it's a real passion! Roky Erickson is definitely on the top of everything, I love the Elevators, his solo albums, his horror rock. I'm still hoping to see him live one day!
I've been very much into two bands recently which are Three Man Army and Blodwyn Pig ("2" and "Ahead Rings Out" albums). If I had to chose one modern band I'm really fond of, I'd say Blood Ceremony. There are other bands I dig as well like Purson and Uncle Acid. If I had to pick one major influential artist I'd chose David Bowie for I feel like he was always "around" me since I'm a kid haha!

David: My biggest influences and what I never get bored listening to are : Johnny Cash and Motörhead for the rightheousness of their music and their sharp songwriting, Lemmy is probably the last True Rock'n'Roll singer alive on Earth, in fact I really started listening to music, thanks to them. Now these are the bands and all the different music genres that I'm listening to: Electric Wizard, Earth, Sunn O))), Kadavar, Sektemtum, Wheelfall, Bass Drum of Death, Sleep, Om, Cult of Luna, Graveyard, Orange Goblin, Valley of the Sun .... and so much more I forgot, I'm not focused on a particular type of music, I listen to all of them and try to pick the one that really sounds good to me. That's it.

Arnold: I have many different cultural influences, mostly touched by cult sci-fi movies, video games and epic, emotional compositions. This is how I've been in touch with music for the very first time.
I'd say that Matthew Bellamy is a great reference to me in terms of sounds and creativity as well as Jack White for his unique, uncompromising, brutal, fuzzy sounds, a fantastic composer for sure. And a third one to conclude would be Jimi Hendrix, for the man with the Strat' is a talented genius.
Lately, I'm absolutely amazed by the performances of Omar Rodriguez Lopez (At The Drive In, Mars Volta...) and my last discovery is Bosnian Rainbows which I really dig too.

Amélie: I'm influenced by bands like Tool and Porcupine Tree, in which there are powerful, complex bass lines. My sound is about loud, fuzzy and groovy bass lines, like in Kasabian, songs like "Vlad The Impaler".
These days I'm mostly listening to Ghost B.C., Ghost Brigade and Tesseract.

11.How would you describe your views on Occultism?

I'd say it derived mostly from the records, books and movies I own. I'm not like practising or anything, it's more of a visual, cultural impact to me, the Occult through the prism of 60's/70's movies and music. I do have some books dealing with Occult Science, Magick, Talismans, Symbols and their meanings. It offers a truly fascinating reading.
It's always through the prism of a cultural matter in the end. Lovecraft got me obsessed with the Cthulhu mythos and the Necronomicon. I read everything about it. I love how Lovecraft built his own cosmology and induced that fear that we, humans, are nothing but tiny little tools and that we should live in fear that something bigger, out of control is going to be unleashed one day!
The imagery of rituals, cemeteries at night, dusk or dawn, half-naked women holding knives or chandeliers, secret societies... I love it in Jean Rollin's movies, the poetic aspects too. I also love the erotic visions of Jess Franco in "The Female Vampire" and "Exorcism". It's the perfect alchemy to me, the combination of dark visions in late 60's/70's movies melting into a psychedelic kaleidoscope. A good compromise between a darkish nature and my love for psych actually. Vampires in bell-bottoms sounds awesome to me.

Music is a major part of my life but I do have a big interest in movies, like I said earlier, mostly stuff from the 60's/70's, horror and fantastic, gialli movies.
I don't like much the times we are living in so I try to find beauty in the little things. I do enjoy long walks, daydreaming and lately I found myself thinking a lot about a future video clip for the band. I've visited some places, I've got some ideas, another thing to work on! On Sundays, I like to wake up in the morning and go to some garage sales, picking up some records, dusty books and anything unusual my heart goes for.

I'm from a left-wing family, my grandpa told me about human values which I now really wear on my sleeves. I do have chills when people are gathering to fight for their rights or defend an ideal of living.
Staying with the family influences, my grandma on my father's side is very much into Astrology and readings, she has some pendulums and many books. I've got from her that interest in Astrology, when I was a child I became more and more curious about the signs and their meanings.
I also have a deep interest and knowledge about the Roman Empire's coins that I acquired during my teenager's years, so in case you need to have one coin checked, let me know about it haha!

Thanks a lot for this interview, it was a real pleasure! We hope to meet you someday on the road somewhere! Doom on!

Posted by OccultBlackMetal at 9:40 PM