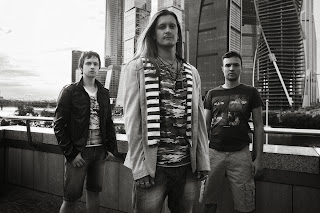 1. Can you give us an update on what is going on with the band these days?
In fact it's mostly PR and promotion stuff we do now. We are also trying to come up with our first video script. It's kinda tough: there's no budget. We gotta think of a very good storyline. Maybe some friends will help with the camera and editing. I hope.
There's also one new song that keeps playing in my mind. Should work on it.

2.How would you describe the musical sound of the album and how does it differ from
the release you put out 2 years ago?
The songs were performed much better than 2 years ago, especially the vocal parts. Even the last few songs are a bit better than the first ones cause the album took so much time to produce. Overall, it's a classical sound from the 90's: oldschool Marshall-headed guitars, reverb'ed drums, like they did at that time. Right now what they do is more like "into your brain", heavily compressed sound which is very close to your ears. I like it too, but I want to keep the atmosphere that I once enjoyed in my favourite albums.

3.What are some of the lyrical topics the new release explores?
It's a very broad topic, really. I write about fantasy, about sci-fi, politics, even religion. Lots of emotional stuff. Love, hate, pity, envy, jealousy. Feelings inspire me. Strong feelings inspire even more. Books, movies, people too. Anything.

4.What is the meaning and inspiration behind the name Starsoup?
It was a result of a very consious process. We had a few words we liked. "Soul", "star", "sky", "fall", "sun", something else. First I came up with Soulfall (I still like it!), then Starsoap. But it would sound way too funky. Starsoup is original enough :) I was a bit scared in the beginning, but I totally love it nowadays.

5.Currently this band is only a studio project, are there any plans for live shows in the future?
I very much hope so. It's gonna be hard - the musicians should be able to play well - and sing the backing vocals too. But it's doable. If the audience wants us to come somewhere, it means they like the music. So we really want our songs to spread throughout all the world and then play them live someday.

6.The new album came out on Sublimity, can you tell us a little bit more about this label?
It's a small Russian indie label. They published my first release (Distant Sun - Sunless Citadel) a year ago and I'm happy to work with them. The album will come out with a very limited number of copies - 125 cds. It's gonna have a nice booklet and all.

7.On a worldwide level how has the feedback been to your music by fans of progressive metal?
Everybody says they want more heavy songs. Too many ballads on the first album! But this has some advantages: it means I can play a few songs with just an acoustic guitar, alone. Easier to arrange a gig this way :) I didn't intend to write so many soft compositions, it just came out this way. We'll move on. People seem to like quite a few songs - "Angels", "Past Bites", "Try", "Perfect Loser". It's a good sign.

8.Are there any other musical projects going on these days?
Yeah! I'm the singer for the popular Russian speed-metal band called Shadow Host. We're about to release our fifth album and it's gonna be bombastic. Aggressive and speedy thrash metal like Overkill/Dark Empire/Persuader. I also play a huge part in another project - "Distant Sun". It's more power/thrash metal music. Fast, heavy, but melodic. Like Rage and Iron Savior. I've only released one 6-song EP yet.

9.What direction do you see your music heading into on future releases?
Definitely not into more ballads :) I wanna do real progressive stuff in the future, maybe with a little hint of modern metalcore tendencies.

10.What are some bands or musical styles that have influenced your music and also what are you listening to nowadays?
I love popular stuff: Metallica, AC/DC, Blind Guardian, Dream Theater (gotta check their new album btw). I also listen to totally different rock styles from Green Day and Good Charlotte to Killswitch Engage and In Flames. I rarely check out the new bands. I'm like stuck in the 90's.

11.Outside of music what are some of your interests?
I work in the internet business - website promotion & seo. I also teach economics (I got a PhD) - a few lectures a year. I love sports - cycling and rollerblading. But music is probably the biggest part of my life now.

12.Any final words or thoughts before we wrap up this interview?
I only hope a few mp3 files will land on somebody's hard drive after this interview :)
Stay metal!
Show message history

Posted by OccultBlackMetal at 1:48 PM