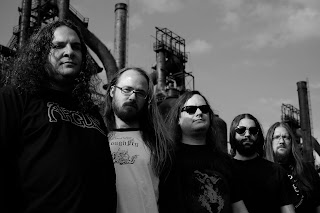 Jason: We spent our Spring and the first half of Summer recording the new album, Beyond The Martyrs; while that was all going on we tried to keep our schedule free to focus on that.  We did some traveling around along the East coast in July and now we’re basically trying to coordinate as much time as we can together as a band to practice up for our stint in Europe this October.

2. How would you describe the musical sound of the new album and how it differs from previous releases?

Jason: This album definitely has more elements from the traditional heavy metal side of our sound.  We’ve always been a bit of a dichotomy in that we carry this Doom tag around; and while we like to add a bit of that epic doom feel into some of our songs, none of us really feel rooted in the genre at all.  So, this album brings out a more aggressive tone overall, the guitars are more out front and the writing ended up with a slightly more consistent medium tempo.

Kevin: This album still sounds like Argus. The biggest differences I think are there are less doomy passages and the songs are shorter in general.

3. What are some of the lyrical topics and subjects the band explores with the new release?

Butch: The lyrics are mostly from personal experience. It’s been an interesting couple of years for me. “By Endurance We Conquer” and “Trinity” are based on historical events being the Shackleton attempt to cross Antarctica in 1914 that ended with his ship, The Endurance, being crushed by ice floes and he and his team stranded until August 1916 and the atomic bomb creation is the subject of “Trinity”. I had meant to explore a few weird fiction kind of things but nothing worked out this time. Overall the tone of this album’s lyrics is melancholy. I like to leave it up to the listeners to interpret what I’m talking about.

4. What is the meaning and inspiration behind the bands name?

5. What are some of the best shows that the band has played so far and how would you describe your stage performance?

Erik:  Dublin Doom Days in 2012 and Hammer of Doom in 2011 were my personal highlights.  We’ve played quite a few Doom festivals in the U.S. that have been a great time as well.  On stage there’s no real theatrics or frills to our live show.  We just jam and have fun – hoping that same vibe transfers to the audience.

Jason: We just revealed the dates for our European tour, it’s not a large one but we’ll be doing 8 or 9 gigs over there starting in Ireland and ending at Dutch Doom Days in The Netherlands.  A full list of everything we have booked currently is available on our website,argusmetal.com.

7. On a worldwide level how has the feedback been to your newer music by fans of metal?

Erik:  Regarding the new album, we’ve had quite a bit of positive feedback in general from most people we’ve talked to about it.  The reviews are starting to roll through; and, we’ve seen a couple of them with the indifferent tone and middle-ground scoring – but, those are mainly from blog sites I’ve never really heard of that seem to cover a gamut of bands and sub-genres. We shall see - only time can tell for the new album and what the fates have in store.

Butch: It's still early. The album isn't out yet. I expect that most fans who hear what we've done are going to love it. There will always be some who like the older stuff better and some who don't get it. Most folks who hear us i think come away feeling positive about us. Looking forward to the reaction from folks.

8. What is going on with the other musical projects these days?

Erik:  Jay and I have nothing else going on with any other projects at the moment.  Butch has a couple other bands he plays with.  Andy still does some shows with Oh Shit.. here and there.   Kevin sits in on drums for a cover band once in a while.

Butch: I have an album on the way with a band called Molasses Barge. Need to go record my vocals for that. Also working on an EP for a project called Hexenhammer. This is with Tim from Seamount, Wilbur from Count Raven and Kenta from Goatess.

9. What direction do you see your music heading into on future releases?

Jason: We don’t try to think too much about the direction of things right away when we’re finished with an album but rather really get into the material we just recorded and start performing it.  New songs typically get finished in such a pieced out way that we’ve often not really heard what a song sounds and feels like until the mix sessions.  I’ve written a little bit here and there though, and in my head I feel like I want to put more depth in the next record, focusing on smaller nuances in the songs that add to the overall.  I think we’ve made clear what Argus generally sounds like and we’ll not veer too far from that because that’s just who we are but doing some new, interesting things with the guitar and my solos is always on my mind with each new release.

Kevin: Only time will tell, but I'm always excited to see where we're heading. Like Jay said, we don't really think too much about a direction. Generally we see where the riffs take us. "Beyond the Martyrs" is missing a longer song, so maybe we will have to work on one for the next record.

Butch: I like that we do things in a way that we don't repeat ourselves yet we stay true to what we do. No wild jumps that make our fans scratch their heads in bewilderment. I'd like to see us attempt a longer format song on the next one.... Maybe not an entire concept album but an album side.... We won't force it though because when you force art it falls short and reeks of being pretentious.

10. What are some bands or musical styles that have influenced your newer music and also what are you listening to nowadays?

Jason: I didn’t really listen to a whole lot of new music during the writing of Beyond The Martyrs, if I had to name a couple bands who were an inspiration several times to pick up the guitar and write a song, Thin Lizzy and Iron Maiden come to mind.  They’re both such great bands with so much inspiring material that never gets old.  Lately I’ve discovered The Winery Dogs though, I’m really digging their debut album.

Erik:  I haven’t been listening to much newer music at all lately.  Rather, I’ve been getting away from the doomier stuff and revisiting nostalgic/upbeat metal from my youth.   Also, I’ve been listening to a lot of classic, guitar-driven hard rock from the 70s/80s:  Riot, UFO, Scorpions, etc.

Kevin: I've had my Sirius radio locked on the 50s and 60s channels lately.

Butch: I'm all over the map from metal to R&B to southern rock.... Just depends on my mind. I find having a wide taste in music opens me up to more ideas or avenues when we write. As for newer bands Age of Taurus and The Monolith Cult are really deadly bands. Tremendous.

11.Outside of music what are some of your interests?

Erik:  I just became a father – so my family is a big part of my day-to-day routine.  Other than that, mainly just stupid little hobbies and work keep me busy.

Jason: I have a little guy in Kindergarten and work full-time as an IT Manager and Web Programmer, so I have plenty to keep me busy.  I typically try to spend most of my free time that I’m not with my family or at work just jamming or reading.

Kevin: I started brewing beer again, so that has consumed a lot of my non-music time. I also like to help with animal rescue and cancer fundraisers. Most of my time is spent with my wife and dog.

Butch: Other than family I try to watch films, read. Music is my biggest hobby though.

12.Any final words or thoughts before we wrap up this interview?

Erik:  Thanks for the opportunity to talk!   Cheers!

Jason: The interest in the band is much appreciated and we can’t wait for the album to be out and in people’s stereos.

Kevin: Thanks for your interest in Argus!

Butch: Thanks for the interview and to anyone reading it !  Hope to meet you all someday.

Posted by OccultBlackMetal at 11:51 PM