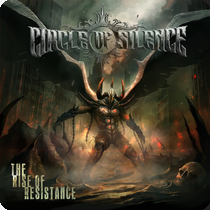 Vocals  are  mostly  clean  singing  power  metal  vocals  with  some  aggressive  sounding  back  up  shouts  being  utilized  at  times,  while  the  lyrics  cover  dark  and  everyday  themes,  as  for  the  production  it  has  a  very  strong,  powerful,  heavy  and  professional  sound  to  it.